To evaluate the quality of embryos mainly a morphological method is used. Embryos are evaluated according to the following criteria – the number of blastomeres, equality and the fragmentation of blastomeres (disruption of normal blastomeres). However, this is the oldest method of assessing embryo quality, but it is not perfect – it is subjective (it depends on the level of experience of embryologist), the embryo is extremely variable in its development – unsightly embryo on the 2nd day (a sort of “ugly duckling”) can turn into a perfectly healthy and a very cute baby. Currently, a new method for assessing the quality of embryos is embryoscopy. Its principle is as follows – every 10-20 minutes it takes a picture of the embryo in the 7 layers, using a computer program the images are superimposed one on another and get a short video – “summary” of each embryo.
Using a special computer program helps to identify the key parameters of embryo development:

The principle of data analysis is shown in the following scheme: 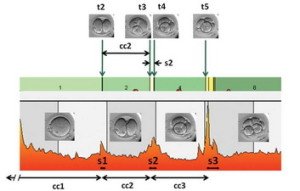 All the data is analyzed by a computer program on a particular algorithm, and it determines the “rating” of each embryo, i.e., its probability of implantation and live birth of a healthy child. What are the main advantages of embryoscopy?

1. Noninvasive (without interfering with the embryo) detailed analysis of the quality of embryos.

2. Possibility of a selective transfer of one embryo with the maintenance of pregnancy rates achieved in the case of transferring 2 embryos.

3. Ability to conduct a retrospective analysis of the cycle in case of failure and choosing the right strategy for the next cycle.

The method of embryoscopy introduced into clinical practice in 2009, the first child in the world after embryoscopy was born in 2010 in Spain, and in 2012 in England. The embryoscope of Unisense the Danish company was installed in the “Nadia” clinic in March 2012. This device is the 110th in the world and first in the CIS and Eastern Europe.